Radial Timber featured on last weeks episode of ABC Landline, the show went in depth of about the journey of Radial Timber, from the new Mill in Yarram, Radial Sawing technology, Hardwood Plantations and how Radial Timber is helping steer the timber industry towards a more sustainable future.

Photo: The logs at the mill in Yarram are cut into wedges, which are turned into boards. (ABC News: Tim Lee)
Related Story: Radial mill bucks trend of closures in timber industry
Map: Yarram 3971

The deafening din is the same as any sawmill, but the timber rolling off the conveyor belt is far from conventional.

It has been radially sawn, a milling technique that delivers some enormous advantages over existing methods.

“We cut it up like a pizza or a cake, so we’re getting round logs and cutting them up into wedges and turning those wedges into boards.”

Those boards are invariably more stable than conventionally sawn timber.

The technique helps counter the natural stresses and strains that cause timber to warp. More excitingly, radial sawing can convert much smaller logs into useful timber, and that means it has big potential for Australia’s emerging plantation-grown timber industry.

Its proponents believe it will hasten the shift away from the current large reliance on native forests.

A new $6 million sawmill at Yarram in Victoria’s east is the culmination of three decades of invention and careful development. It takes the radical idea of radial sawing from a concept to a commercial reality.

“I’ve always said that once our demand exceeds our supply that really proves that the technology can work and the product can be accepted in the marketplace, so the slow build has been good for us because we’ve been able to iron out any bugs,” Mr McEvoy said.

“And we’ve been able to really develop the technology and the end result is this mill which is going to cut a lot of timber for a long time.”

‘I thought it was too good to be true’

The technology has its origins in the tall eucalypt forests that thrive in the nearby steep hills.

Inventor and ardent conservationist Andy Knorr was tired of seeing prime sawlogs sent to a district woodchip mill, so Mr Knorr invented a prototype mill that utilised up to 80 per cent of a log — about double that of conventional milling.

His quest to improve the technology continues, but a few years ago he sold his Yarram mill to Mr McEvoy and several other investors who saw the merits and potential of radial sawmilling.

To date some of Australia’s leading architects have been the flagbearers for radial timber.

“Architects have taken our product and taken it to a whole new level,” Mr McEvoy said.

“They’ve actually given us even more confidence in our product in what it can do and use it in some amazing designs.”

Some of those designs have won national design awards and the timber has won support for its environmental credentials, its durability and aesthetic appeal.

“I thought it was so pure and simple and clever that I was immediately drawn to it,” Melbourne architect Ric Zen said.

“I thought it was too good to be true, to be honest at first.”

Mr Zen, an enthusiastic supporter of the radial sawing technology for several decades, said he was delighted that the concept was being vindicated.

The company was also in a trial venture with Heartwood Plantations to evaluate the best species to grow to supply the mill in years to come.

The trial plantations, on sites near the mill, were looking so promising that they are on track to yield useful sawlogs by the time they reach 25 years of age. That is about half the time it takes to grow a sawlog in a native forest.

For the small town of Yarram, the new mill means 15 direct jobs in a region where employment can be hard to find.

Mr McEvoy said he never doubted the technology would work. But he admitted he was constantly surprised by the success of the business.

Please note that this tool is to be used as a guide only.
Radial Timber takes no responsibility for the incorrect usage of this tool and advise that customers ensure that the quantities calculated are correct.
X 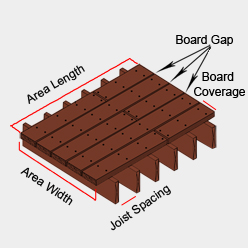